A Private View at the Menier Art Gallery

My sister Teresa (no, not the Saint) has invited me to a private view at the Menier Gallery in Southwalk.

We enter the gallery, and smart waiters offer me a large glass of wine and a plate of nibbles. I pick at the tasty selection, and feel sorry that I have already had dinner and there is no room for more; nevertheless out of pure greed I stuff the delicious morsels into my mouth, instantly regretting the increase in my girth that will ensue.
The wine is cool, dry and crisp and just how I like it.
The artworks on the walls are accomplished, sophisticated and sublime, displaying a  simple beauty that the Japanese are so good at.

Teresa grabs my arm ‘We are in the wrong gallery’ she tells me.
‘What?’ I mumble. The food in my mouth restricting clear speaking.
‘We’re in the wrong gallery!’ She reiterates. ‘The one we’re invited to is downstairs… in another gallery. I gulp the remainder of my plate and swill it down with the cool crisp wine.

Downstairs a glass of Champagne is placed into my hand, and I wave aside the offer of crisps. I drift around looking at the paintings and sculptures. Everyone here seems to know everyone else and a lot of talking is going on.

﻿
I prefer to stand quietly by myself and gaze…

at a perfect  little mono-print by Ilaria Rosselli Del Turco. 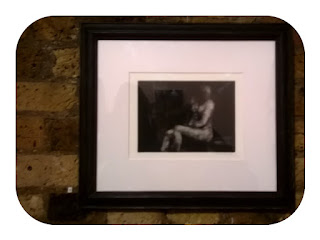 I become absorbed in it and I muse -
'I would buy that if I had the money.' I look the name of the artist up in my catalogue -
' Ilaria Rosselli Del Turco? - what a beautiful name. Why can't I have a name like that?!'
I wander around and discover an interesting sculpture by Laurence Perratzi. 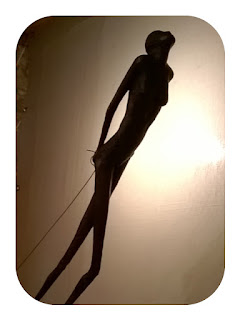 On the way home we walk by the river, which tonight has its beautiful face on. It is awash with colour from myriad light reflections, rippling in the water. 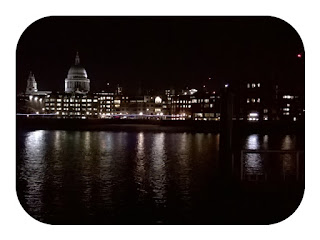 The moon is full and high; but can't quite climb high enough  to perch on the peak of the Shard - and only manages to hang at one O’clock beside it.  (*apologies for blurred photos from my phone - but hey, let's blame the Champagne!) 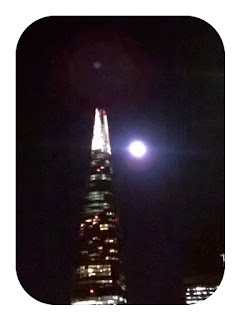 The air is cool and crisp as the wine in the Japanese exhibition. 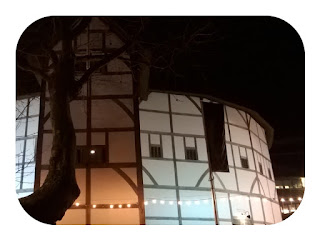 We saunter along, past Shakespeare’s Globe theatre’s  gleaming Tudor white walls and passing beneath the stark dark industrial outline of the monolith building of Tate Modern, call in to the Founders Arms near Blackfriars bridge to quench a thirst caused by a touch too much Champagne. I order a glass of water and a beer as a chaser. 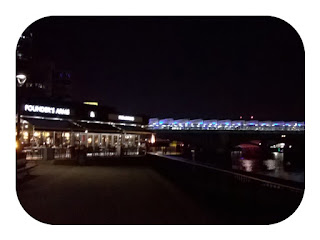 Later my  sister and I say goodnight and wend merrily on our separate ways – she toward Waterloo station and I back to the Millennium Bridge. 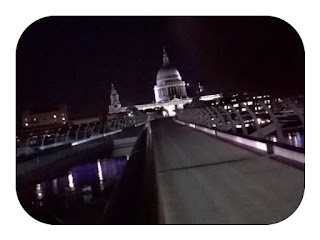 The bridge is free of the crowds at this time of night and I can enjoy a brief moment of solitude. A flock of gulls flaps over me to land  on a great strut that runs the length of the bridge; and the birds jostle into line to roost. 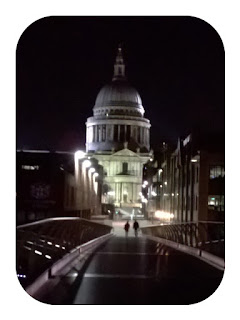 A couple are strolling on the bridge; their footsteps making a soft metallic twang on the steel walkway.  They don't notice me as they pass by, nor do they notice the small dragons beneath their feet, that an artist has painted minutely on each glob of chewing gum on the bridge. Their eyes are on each other, and the moon. 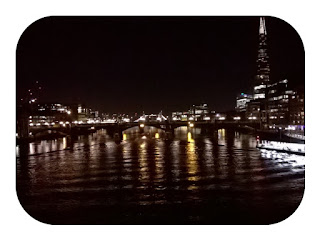 I am taking my normal route home toward St Bartholomews and Cloth Fair, but suddenly I am confused and feel lost and disorientated (no, it's not the Champagne!).
My route is blocked. I am sure that when I came by this way recently there were  no building works.

There had been great solid buildings here! The alley I usually go down is no longer there!

There is a vast space where a massive demolition has taken place. The like of this has not been seen since the Blitz I feel sure.

What were the buildings that have gone? Why can't I recall what was there before?

I am forced to divert and find another way. So much building work is going on in London today. There are 150 skyscrapers planned!

Can you believe that!?

Gone are the days when the clay substrate that London stands upon restricted the height of the buildings. At least, at this time of night the works are silent.  The construction workers are asleep; the heavy drilling and thrum of construction to start again in the morning.

There remains one workman however, in a hole fiddling with wires, with a faint smell of gas around him.

I move on quickly. 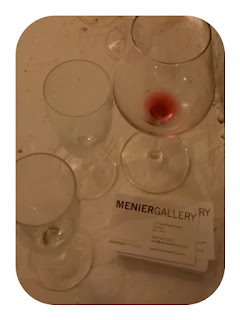 *The 12@ Menier exhibition of twelve contemporary artists focusing on notions of representation and abstraction runs until Saturday 27th February.

Now is the Time to Ban Joggers from Tranquil Walkways


I was feeling a little stressed - the pace and trials of work and living in the city was getting to me - so I reckoned a little stroll down by the river might do me good - calm me down a bit.


The refreshing breeze from the water was bringing me the scent of the ocean that was drifting along on the tide from the estuary far away down river, and filtering gently through my nose passing into my pollution wracked lungs. I breathe deeply while sauntering past a cormorant holding his wings spread out, standing still in a pose like a carved statue at the entrance of some grand mansion.


Some Clipper boats motor past taking high fee paying passengers to the different jetties of the Tower of London or the O2 Dome. I like boats. I watch the spume of their wake and the surging waves. I am starting to relax.


Suddenly, I hear panting and a huffing and puffing behind me.

Before I can turn round, a whooshing whoosh whooshes by me and a great mass of runners streak past and skim by, within an inch of my life. I totter as the gust of air affected by this phenomenon of joggers churns and dispels around me.


The joggers are all large in stature (why are they so big?) and panting and sweating, and grunting, blowing and gasping, and have passed me with not an inch of space to spare between us.
Their bright Lycra outfits glaring at me. 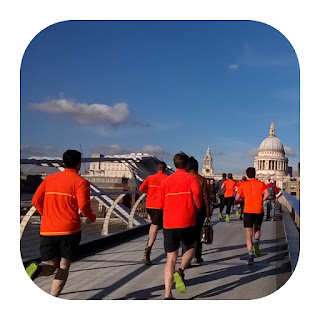 Then they are gone.
'My goodness' I exclaim.
I resume my stroll feeling somewhat overwhelmed by all those large, healthy people rushing by. I watch gulls flying along above the water and then up and over a bridge.
I hear another train of huffing and puffing and panting behind me, and there are more Lycra clad joggers over-taking me dangerously close; then I see more joggers coming towards me at great speed
Whoosh! WHOOSH!
The whooshing breaks the sound barrier (possibly a slight exaggeration).
It is very disquieting to have quite so many joggers using the river path. They leave no room for quiet, slower activity - like walking for instance.
There are so many of them - why aren't they all in their offices?

Why do people jog? Can anyone tell me? Is it fun?
None of them look like they are enjoying themselves. They obviously don't see anything while they are doing it, or they might give poor defenceless strollers some leeway.


Joggers are on the increase. They are breeding in huge numbers. I'm not saying stop jogging – oh no, not that! As I am sure it is a healthy activity -   I'm just suggesting not to do it ‘en masse’ like a charge of rampaging marauders. Give a thought to the slower specimens of mankind who are out for a gentle stroll; and not to sweep past them in such a way as if they weren't there and discarding them to the wind.

I've nothing against Lycra, don't get me wrong. I like Lycra. In fact, it can appear rather attractive on some people (I could name a few I know :)) But, it should be worn at home where it belongs and not out in the streets frightening the horses (Or disturbing constitutional walks of small people).

'Walking in the Rain' detail It was pouring with rain. My head is bowed down against the torrent, and I am holding my umbrella f... 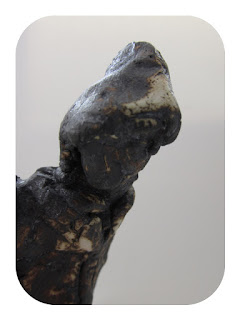